"Out of nowhere, there came a caravan. This was around a campfire light."


Chelsea: Ok, ok, let’s tell them about what happened when we went to get the beer.


Bonnie: So, we get our 5 remaining PBRs and hookah and are trudging back up the dirt road to the boys’ campsite when Chelsea, as per usual, panics: “Oh my God, I don’t see the firelight anymore. Do you see the light? Oh my god, they left. They doused the fire and left.”


Chelsea: Whoa, whoa, whoa! Chillax with that! I said “WHAT IF” as in, “it would be pretty insane if they ditched out!” Realistically, it would be impossible for three boys to put out that huge fire, pack up and move sites in the 10 minutes it took us to pop a squat freshen up and grab the beers... I think.


Bonnie: Well honestly, they were probably thinking, “no way these chicks are coming back up here”. HA! We showed them. Our quest for partying and meeting boys in the woods has no end.


Chelsea: Our quest for partying and meeting boys, in general, has no end.


Chelsea: So, we hike up the hill, cooler in tow, and Bonnie is barking at me “not to sound so winded” behind her. Um, you try carrying the cooler instead of that light ass hookah, jerk!


Bonnie: They were mountain boys, we can’t go looking all out of shape and dainty.


Chelsea: Because they totally didn’t notice on our hike back up the Canyon the next day.


Bonnie: We were already in at that point. They were addicted.


Chelsea: Fo’ sho, fo’ sho. Anyway, the pantsless boy, Vaughn, had dressed himself for the occasion. Bummer. What kind of campfire party could this be if we’re all fully dressed?


Bonnie: Ok, to be fair, Vaughn was wearing Long Johns when we intruded on guy time. However, and thankfully, there was real pantslessness to come....and let’s just say it wasn’t on the part of these two classy ladies.


Chelsea: So just to set the stage a little bit, the spring air was crisp, the fire was roaring, the moon was so large and bright that “heading to the bathroom” was quite the public task. We were all drinking, smoking some hookah, and getting to know each other a little bit when we learned that our new friends are... wait for it... FOREST FIREFIGHTERS! Legit “we fight forest fires” was the exact description they gave us. JACKPOT!!!!!!!!! As the night went on, and the drinks flowed, more stories started to come out of the woodwork. We couldn’t help but notice that Alex seemed to be at the center of some... er... interesting scenarios.


Bonnie: Let’s just say, Alex has done quite a bit of hitchhiking, self-tattooing (his ten toes bare the phrase: R-O-A-S-T P-O-R-K-?) and experimenting with alcoholic beverages...


Chelsea: For instance, the pickle-tini, consisting of vodka and pickle juice. He also pushed a Cherry Amaretto and Orange Juice concoction. Don’t know about that myself, but you’re welcome to try it out, readers. Vaughn would also probably want us to mention the soon-to-be-infamous Buch-monkey, a mixture of beer and kambucha, which he guarantees isn’t as gross as it sounds. We promised to plug it in here... it’s gonna catch on, buddy! We got you.


Bonnie: So, for the sake of these new friendships and Alex’s privacy (not that it seems to be much of an issue for him), we’ll leave it at that. Ooooooh, we just have you all dangling by a thread, don’t we?


Chelsea: After about an hour and a half, we all ran dry of beer, but fear not, the boys still had whiskey aplenty.


Bonnie: Enter the quiet and unassuming Vaughn, who suddenly emerged as the Nip Master (get your heads out of the gutter, people. It’s not what you think). It felt like every 5 minutes he was there with a cap full of whiskey saying, “Nip?”...see?


Chelsea: He actually didn’t exactly ask. He just sort of handed it to you and said “NIP!” like the subtle instigator he was.


Bonnie: And we were unfortunately plagued with the Alex syndrome of being incapable of saying no.


Chelsea: Oh. My. God. You all know I love me some grade-A peer pressure, but it was almost TOO easy with this guy. He tried to stand at the other end of the campfire away from me, as though I’d forget he was there and let up with the hookah. However, I’d just motion him over, hand him the pipe, and he’d succumb. EVERY TIME. Ahh... the power. I should also mention that Brian needed absolutely no encouragement to drink or smoke. He was a trooper throughout the evening.


Bonnie: Yeah, I thought I had made the wise choice picking him as my sole partner, while Chelsea had to share with the other two. Wrong.


Chelsea: Yeah, good try with that. I semi-contend that the others just wanted our attention (ie begging them to smoke/drink more) but Brian knew the true way to our hearts. NO BREAKS!


Bonnie: We’ll start wrapping up this portion of the night now, but having gotten a little taste of our new friends, can anyone make a guess who the pantsless culprit was?


Bonnie: I’ll trust the general deductive powers of our audience and not give it away. I think we all know.


Chelsea: Yeah, so, I suppose you could say it was getting late. It was either 3 or 4 AM. We don’t know for sure. Apparently Arizona refuses to abide by daylight savings time, so according to The Network (shout out to Verizon hayyy!) it was 4, but according to Arizona, it was only 3. In any case, hiking the Canyon the following morning was starting to seem like a pretty daunting prospect.


Bonnie: And for one from our five-some, it was. Can we all guess who bailed on the morning 6 mile hike?


Chelsea: Digressions aside, we decided to head back to Prudence to call it a night. Plenty of partying, laughing, and flirting were achieved for the evening, and if we were going to have any prayer of accomplishing what we actually came to the Canyon to do, sleep would need to happen first.


Bonnie: So we packed up and said our goodnights, with plans to join forces for an epic breakfast in the morning. As soon as we were safely out of ear-shot, Chelsea and I started giggling at the absurd turnaround our night had taken. We were pleased with our decision to end the night and looking forward to some sleep. Then we saw a rogue light traveling down The Hill. Did we forget something? Is someone (probably Brian) being a gentleman and wanting to see us safely to our campsite? We stopped. The light stopped. We moved along. The light continued its descent. Soon it was joined by a second light traveling in the same direction (right towards us). The lights met and continued toward us. We waited, fairly perplexed. We could finally make out the figures of two men: Aha! Brian and Vaughn, sleeping bags thrown over their shoulders. “We decided to take you up on your offer to snuggle.”


Chelsea: To clarify, we did offer a Prudence snuggle-fest. These boys, rugged firefighters though they may be, were sleeping on a tarp outside in the 30 degree weather. Nobody can say we don’t have hearts or help mankind. It’s the American spirit. I swear, we didn’t even notice how attractive, dirty and bearded they were!!!!!


Bonnie: To further clarify, no snuggling ended up happening. Damn, these Oregon boys are gentlemen.


Bonnie: We recovered. And rose shockingly early (to Vaughn’s dismay. He kept challenging us that if we REALLY tried, we could all fall back asleep).


Chelsea: Good try, Vaughn. I try that on the kids I nanny all the time.


Bonnie: Yup. Didn’t work. But we did make a delicious breakfast feast that I can confidently say was worth Vaughn’s early rising. It was a team effort: between our collective ingredients, we made some bang up breakfast burritos. 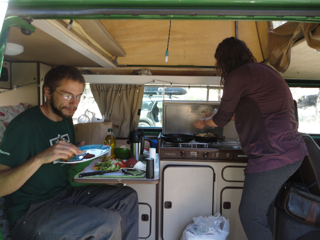 The chefs, Brian and Bonnie at work 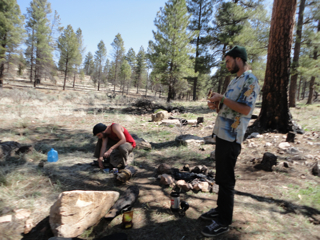 The boys putting themselves to good use:
Vaughn (left) making coffee and Alex (right) entertaining us on the ukulele


Chelsea: Then it was time to head to the Canyon for some hiking. We settled on Bright Angel Trail, even though it is one of the more crowded areas of the Park. By the time we made it to the Canyon (12:00 PM), we decided the only thing more annoying than dodging tourists for the first mile on the way down the trail (these kids can’t hang) would be waiting in a long line and cramming onto one of the over-crowded shuttle buses to the other trails. Why not take advantage of what was right in front of us?


Bonnie: We cruised down three miles, which seemed like no big deal...


Bonnie: The four of us sat on a cliff overlooking the vista, and took in the experience. Brian regaled us with some bird-calls that echoed throughout the Canyon. 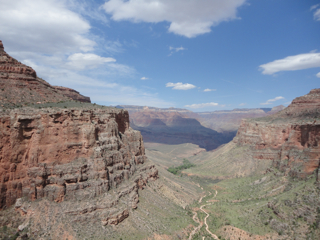 Our view from 3 miles down Bright Angel Trail 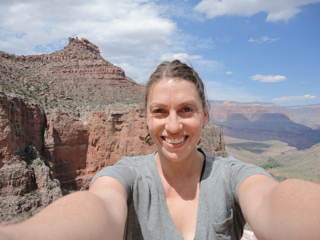 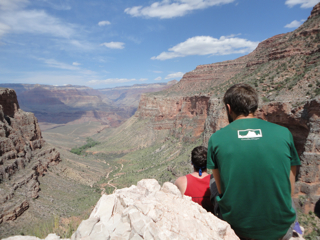 Vaughn and Brian on their perch. 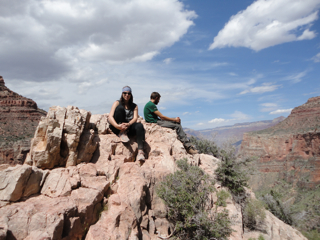 Myself and Brian breaking on the cliff


Chelsea: It was pretty amazing. You can hear Bonnie’s child-like “AGAIN, AGAIN!” exclamation in this video:

Bonnie: By the time we mustered up the motivation to head back up, it was 2pm. Well planned, geniuses. Let’s save the strenuous 3-mile hike up the GRAND CANYON for the hottest time of day.


Chelsea: We won’t go too into specific numbers of breaks or anything... mostly because we lost count. But WE MADE IT!


Bonnie: Hey! We were passing people left and right. But, yes, we did take a short hiatus in our “No Breaks!” trip motto.


Chelsea: True dat. Anyway, we made it and we felt incredible afterwards. Ok, more like exhausted and haggard. But emotionally, we felt incredible. There might have been a Double Dare style high-five at the precipice!


Bonnie: And at least we didn’t have to be bullied into driving over 200 miles to Lake Meade afterwards like Brian and Vaughn. Alex suddenly the no-nonsense, taskmaster??


Chelsea: Yeah, poor boys. At least they can say they slept inside for a night.

Brian, Alex, Vaughn and their beloved wagon, Misty (who had a little girl-on-girl thing going with Prudence for awhile. We'll let you decide who was the aggressor in that relationship AHEM)

Bonnie: That’s true. I think we can say we brightened up their trip, as they did ours. And besides, even if we didn’t, are dirty Oregon firefighters really going to be reading our blog to dispute it?


Chelsea: And if you guys are, FRIEND US BITCHES! Even you, Alex, you saucy minx.


Bonnie: We’re checking out now. Be on the lookout for Mesa Verde, New Mexico, and a little musical surprise we have in the works for you all. Cheers!
Posted by chelsealevinson at 3:06 PM