"We're really doing it, though, aren't we buddy?"

Leg 1: LA to Vegas
As any two responsible young women who are about to embark on a 3 month journey would do, Bonnie and I got tanked the night before we left for our big trip. We went out to Venice Beach to celebrate with fish tacos and margaritas with our best friend from high school (shout out to Kristina, hay girl hayyyy!). As you can imagine, things quickly got out of control, and we ended up spending our last night at “home” on the floor of Kristina’s apartment (she would probably prefer that I inform you that she did make us beds, but those are details which make the story seem less dramatic, and as you all know, I am all about the good story, and so therefore I’m going to sadly have to make her seem like a less gracious host than she really was. DEAL.) Anyway, at approximately 8:15 A.M., I somehow managed to wake up naturally (excitement? anxiety? mysterious consequence of a hangover that everybody has battled at one point or another?) and informed Bonnie that it was time to wake up because it's the responsible thing to do OUR TRIP IS FINALLY F-BOMBING HERE. 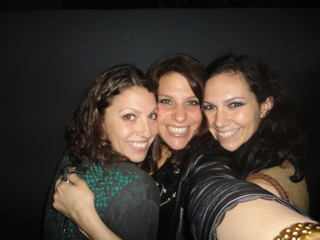 So much love. So much closeness. Bonnie, Chelsea, Kristina. :]
Four hours of grueling hungover packing later, and we were finally ready to get on the road. It was time to say goodbye to Bonnie’s mom, who has been a complete saint (but like a COOL saint) through all of the preparations for this trip. After a tearful goodbye, we set off. And by set off, I mean we pulled out of the driveway with Bonnie’s mother screaming “EMERGENCY BREAK!!!!!!” after us in the most adorably hilarious mom fashion.
Famous last words. Truthfully, Saint Beth probably could have come up with a day’s worth of material to yell at us as we drove off, but she chose “EMERGENCY BREAK!!!!!!” It was so amazing, because Bonnie can’t seem remember to put down the e-break to save her existence. And come to think of it, how funny is it that it’s called an e-break? That’s totally its rapper name. I can’t believe J-Lo and K-Fed got famous for totally ripping off the emergency break’s style. Complete hogwash, fans! Anyway, I digress. We laughed our asses off at the send-off because it’s just so fitting for how endearingly flighty we can both be.
So we got on the road. Like for real. On our trip. The trip we’ve been talking about for almost a year. I’m sure it isn’t difficult to imagine the amount of girlish squealing and Katy Perry singing/awkward swaying/fist pumping which can only pass for dancing whilst in a car that has gone into merely SPEAKING about this trip, much less embarking on it. IT WAS A PARTY IN THE USA, Y’ALL. But for real. I know I use that phrasing loosely, but this time we are not only having a party IN the USA - we are having a party ACROSS THE USA.
After a couple of hours of awesome LA traffic, we finally entered the desert on Route 15.  Truthfully, the road was pretty treacherous considering our vehicle. A steady incline might not seem like a big deal for a normal car or truck, but carting around in a nearly 30 year old bus has its drawbacks. Like trying to drive uphill, ever. She chugs, and she works hard for it, but Prudence is NOT built for climbing. Regardless, we had no choice but to just stick it out and hope for the best.
About an hour into the desert, I started feeling like the gas pedal was not responding as well as it should have been. It felt loose, and as hard as I pressed it, Prudence could not seem to pick up any power. Anxiety started to build in my chest, as I desperately pressed down harder. We could not have been going more than 35 MPH, and even in the slow lane, we were getting glares from monstrous, lumbering vehicles who managed to whiz past. I concluded mentally that perhaps we were just the slowest car on earth, and tried to lay it to rest, when . . . the gas pedal just stopped working.
Like, nothing. No response.
“UUUGGGGGGGGGHHHHHHH!!!”
The pathetic gas pedal lay flat on the floor, dead and disconnected. Prudence started to lose steam, unable to respond to my frantic pedal-pushing, as I panicked with every fiber in my body. I cannot even pretend like I kept my cool and held it together. I pulled off into the emergency shoulder (the e-shoulder! too soon?), and mumbled a bunch of incoherent crap about death.
“Whoa. Slow down. What happened?” Bonnie asked, keeping a much cooler temperament than myself.
“It’s over.” I stated dramatically. So typical Chelsea. World’s ending, stop the presses!!!
“WHAT’S over??”
“The gas pedal. It’s gone.”
“It can’t just be GONE.”
“Oh, but it can. It’s over. It’s done. It’s dead. It’s not doing anything.” Clearly, at this point, you can observe that I have abandoned all rational thought, disregarded the fact that the car was still running, and jumped ship on our entire trip.
“Let’s look at it. It can’t be dead, Chelsea.”
In my head, I was saying “Don’t reason with me, Bonnie. I know a dead bleeping gas pedal when I see one!” but in reality, I just said “okay.”
After polling the audience and using our lifeline, we learned that apparently in old cars, gas pedals just “snapped into place”, and aren’t like, nailed or glued or melded onto anything. Fucking excellent. Can we all just take a second to imagine this in real life? Like, it’s the early 1980’s and Volkeswagon employees are just sitting there in their factories, snapping things into place. Like they’re building a model airplane or something, not a giant machine that can kill people. No bigs. Gas pedals aren’t crucial or anything. WHY WOULD YOU NEED A GAS PEDAL WHEN YOU’RE CRUISING DOWN A MAJOR INTERSTATE? Don’t get crazy, here! Just snap that bad boy into place and get on the road. Christ.
Anyway, we made like the early 1980’s and did just that, finally heading on our merry way. Not without me continuing the dramatics, of course, and threatening to have a panic attack every time the power seemed sketchy (which, by the way, is basically all the time because as I mentioned before, Prudence really doesn’t have much going for her on the uphill.) Bonnie didn’t feed into my dramatics, and neutralized me, as per usual. Prudence got a little ornery, because she was the poor little thing struggling on the long journey with an unattached gas pedal, while I took all the glory of the drama. But she did it. She pulled through for us. 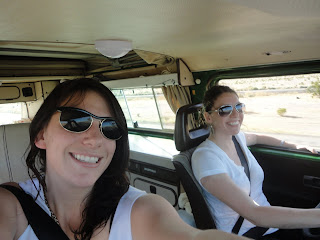 Driving through the desert, post-drama 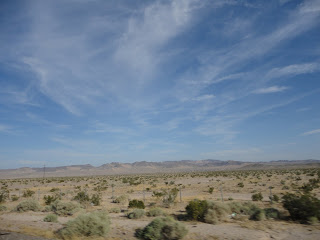 Route 15. Pretty beautiful for a pile of dirt, isn't it?
We managed to get to Vegas safely, and have ourselves a decent evening, the details of which I won’t get too much into, because it’s not nearly as cray as I’m sure you’re all hoping it was.
Although, we did find a hidden gem of creepiness slash non-lameness off the strip at Ellis Island Casino and Brewery, which was recommended to us by Saint Beth. Walking into this place is like walking into a 1980’s Ground Round, including the stale smoke smell, and the middle-America clientele. Their brewery is a 7-days-a-week karaoke bar, which I’m sure you can imagine was much appreciated by the both of us. And the best part? A pint of beer, of which they have several delicious varieties, is only $1.75 at the bar . Soak that in for a minute. Where, in this country, can you get a $1.75 beer besides the bodega or during some happy hour at an awkward time (who gets off work at 2:00 PM? Just call it “Grad Student Hour” people!) We thought our waitress was messing with us when she first told us the price.
“Well, we brew it ourselves,” was her reasoning for why it was so cheap. So precious. Like she thinks that really explains anything. Where I’m from, lady, even breweries charge at least $5.00 a beer, and sometimes even more FOR THE VERY REASON that they brew on-site and we’re all supposed to be so dazzled by their craftiness that we just pay whatever the hell they charge us (Shout out to Heartland Brewery NYC - still love you, you money grubbing bastards! We know you’ve gotta make that Manhattan rent hayyy!)
Anyway, just a little tip for you kids visiting Vegas on a budget, OR just for anybody who wants to see what Vegas might have been like in the 1980‘s before it was super trendy, lame and filled with Jersey Shore cast wannabes, superclubs and pet projects of famous chefs. Do NOT visit this place if you want to be surrounded by anything hot, posh, trendy or elegant. But if you’re like us, and enjoy a nice offbeat place with some character, roughness and bizarre people watching, ch-ch-ch-check it out!
Next stop: Zion National Park in Utah. Stay tuned!
-CHELSEA
Posted by chelsealevinson at 1:02 PM